Earlier this year, Russia decided to re-investigate one of its creepiest cold cases: the Dyatlov Pass Incident. In 1959, nine young, athletic students on a ski trip turned up dead in the Ural Mountains of western Russia, in circumstances that defied easy explanation. Investigators at the scene were mystified, especially when they uncovered traces of radiation, a missing human tongue, and signs the group disrobed before venturing into a snow-covered forest.
No fewer than 75 theories for what happened on the tragic expedition have been advanced over the last 60 years. Russia's latest investigation will pursue the top three.

A Gruesome End.
On January 27, 1959, an adventurous group of eight men and two women set off on a two-week ski-hike. They aimed to conquer Otorten, a mountain whose name, in the local Mansi language, means "Don't go there."
A day later, 21-year-old Yuri Yudin showed symptoms of dysentery and a nerve injury and had to leave the expedition. The details of the next few days are sketchy, but it seems the arrival of a snowstorm on February 1 caused the hikers to deviate west onto the slopes of Kholat Syakhl, or Dead Mountain. With a temperature of -22° F to contend with, they set up camp there for the night. And that's where things get weird.

Group leader Igor Dyatlov had intended to send a message home by February 12 to indicate all was well. When no such message arrived, concerned family members raised the alarm. On February 26, a search party arrived at the campsite, where they found a gory and baffling scene. A half-collapsed tent, still containing some of the hiker's belongings, had been slashed open from the inside. In the snow, human footprints led from the tent toward a wooded area. Between the camp and the woods lay the bodies of three hikers, each several hundred feet apart. Further from camp, among the trees, were the corpses of two of the male travelers, clad only in underwear. Their hands had been burned. Remains of a fire were discovered in the woods. A nearby cedar tree was missing several high branches, indicating someone climbed it in search of a traveler vantage point. Those five hikers all appeared to have died of hypothermia.
More than two months passed before searchers discovered the bodies of the other four hikers. They were in a ravine, buried under 12 feet of snow almost 250 feet from the bodies of the two near-naked men. Nikolay Thibeaux-Brignolle, 23, seemed to have died from a skull injury. The legs of 20-year-old Lyudmila Dubinina were wrapped in pants and a jacket belonging to one of the men. Her eyes and tongue were missing. Both she and 38-year-old Semyon Zolotaryov showed signs of severe chest trauma. Zolotaryov's eyes were also gone.

The Fallout.
It’s not hugely unusual for hikers in a remote mountain range to die of hypothermia during winter. But what would result in nine fit and experienced skiers perishing on the same night, in batches, by different causes?
After examining the evidence, Soviet criminal prosecutor Lev Ivanov concluded that the hikers died due to "an elemental force that they were in no state to overcome." The nature of this "elemental force" was not specified, leading to a laundry list of hypotheses from hobbyist researchers. An avalanche, fireballs in the sky, infrasound waves, and a yeti are among the more popular suggestions that have been put forth. (Along with, of course, aliens.)

The Most Credible Theories.
Avalanche
The rumblings of an avalanche could have caused the hikers to wake suddenly and scramble out of their tent, with no time to get dressed. They may have died from exposure before being able to find their tent again in the dark.
Snow Slab
A snow slab is a particular type of avalanche in which a big chunk of snow dislodges from on top of a weaker layer and slides down, sometimes with fatal results. Russia considers the snow slab to be theory number two, even though it could be filed under "avalanche." (Is that cheating? Come on, investigate the yeti!)
Hurricane
Katabatic winds are winds that flow down the slope of a mountain, driven by gravity. In rare cases, these dense, cold currents can reach hurricane speeds. Dyatlov and friends may have experienced this, sought shelter in the forest, and ended up buried by snow.

Fact vs. Fiction.
Zinaida Kolmogorova, Lyudmila Dubinina, Alexander Kolevatov, and Rustem Slobodin. It is unclear who owned the camera that this photo came off of. (Credit: dyatlovpass.com)
Cold War-era Soviet Russia was not exactly known for being a bastion of free-flowing information, which has made some wonder what the government might have hidden about the Dyatlov case.
In 1990, retired Dyatlov investigator Lev Ivanov fueled such thoughts by writing an incendiary article entitled "The Enigma of the Fireballs." In it, he admitted that back in 1959 he was pressured to conceal evidence of burn marks on trees, which pointed to the possibility of a fireball or other high-speed projectile falling from the sky. This could also have been a missile or rocket, which raises the possibility that the Soviet military was conducting secret tests in that area.

As to the other prominent Dyatlov theories—infrasound, an avalanche and a yeti—debunker David Emery did some investigating for myth-busting site Snopes. Emery looked into the causes of infrasound and found that particular wind patterns "can theoretically generate very low-frequency sound waves that have been blamed for harmful physiological and psychological symptoms in human beings." He noted that, globally, avalanches kill about 150 people per year and are known to cause panic and erratic behavior. As for that yeti, evidence is elusive.
The more unnerving details of the Dyatlov case, such as Dubinina's missing tongue and the traces of radiation found on clothes, continue to perplex. But there is a ray of hope in the newly reopened investigation, which began with a forensic probing of the evidence and the site in March 2019.

There are guided expeditions to Dyatlov Pass, by snowmobile and dogsled, should you wish to visit the place where this sinister event took place.
To pay your respects to those who perished without venturing into the mountains, you can head to Mikhailovskoe Cemetery, where seven of the hikers lie, or Ivanovskoe Cemetery, the resting place of the other two. Both are located in Yekaterinburg, a city of 1.5 million just east of the Ural Mountains.

"Fortune smiles at us. Yuri Yudin got sick, something with a nerve of his leg… he is going home. So, there are nine of us in the future. At the moment we are sitting and singing songs. Guys play the guitar, Rustic [Rustem Slobodin] plays along with the mandolin. Catches your heart. This is the last place of civilization, and it is rare that we met people like that."
—Lyudmila Dubinina's diary from January 27, 1959, five days before her death. 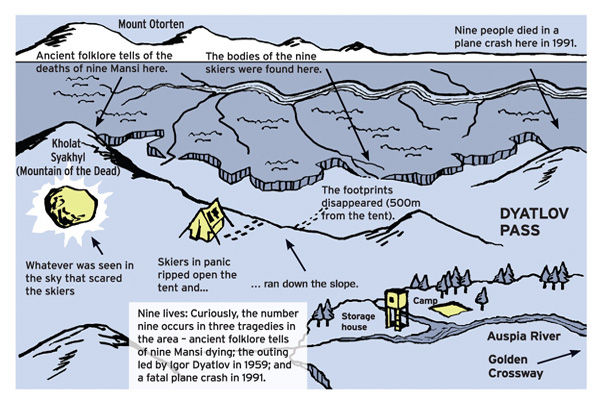 Barbara left a comment for Diamond Love
9 minutes ago

Joyfulldy left a comment for Patricia Shelton
48 minutes ago

Joyfulldy left a comment for Istvánné Nagy
1 hour ago

Joyfulldy left a comment for GIZI ARANYI
1 hour ago

Joyfulldy left a comment for EDIT CSALA
1 hour ago

Dee Retz left a comment for Marie Bolt
1 hour ago

Joyfulldy left a comment for Fairy Light
1 hour ago

Joyfulldy left a comment for joann bogart
1 hour ago