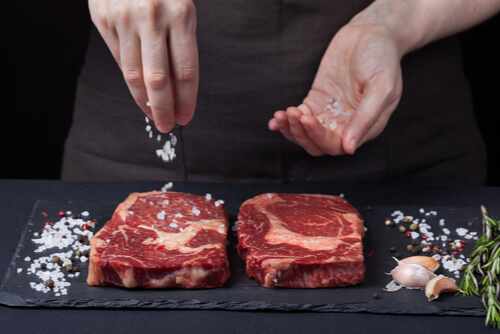 Though salt is often believed to be unhealthy. In fact, several prominent organizations, such as the American Heart Association, warn against eating a diet that is high in salt. That’s understandable, considering that diets high in salt have been found to cause several health complications, including high blood pressure, heart attacks, and strokes. However, given the fact that salt adds so much flavoring to food, and the fact that our bodies actually crave it, cutting out salt completely is virtually impossible.

If you want to avoid the complications that have been associated with salt, but you don’t want to forego this beloved flavoring agent, you’ll be happy to know that you don’t have to! Just change the type of salt that you’re eating. Ditch the table salt and instead, opt for sea salt. Table salt is highly processed, which eliminates vital minerals. It also contains additives that prevent it from clumping. Sea salt is created from evaporated saltwater from oceans or lakes, which leaves behind trace minerals that offer various health benefits.

Sea salt really is quite interesting, especially when compared to its processed, refined counterpart; table salt. Here is a look at 20 interesting things about sea salt.
1. It’s a rich source of trace minerals

Unlike table salt, which is highly processed, sea salt undergoes virtually no processing. This allows it to retain most of the natural minerals that it contains. This includes various electrolytes, such as magnesium, sodium, potassium,3. It balances fluid levels.

Consuming sea salt can help to balance fluid levels in the body and prevent dehydration. If you eat too much salt, you retain water; however, if you are not consuming enough salt, you lose water, which can result in dehydration.

By eating a moderate amount of sea salt on a regular basis, you can help your body maintain proper sodium levels, which will help to balance out the ratios of sodium and potassium; electrolytes that work in unison to ensure the right balance of fluids in the cells of the body, the plasma of the blood, and extracellular fluids. and calcium, all of which are vital for your health. Some of the important functions that electrolytes play include aiding in muscle contraction and regulating the beat of your heart. By consuming sea salt (in moderation), you can avoid imbalances of electrolytes and the complications that these imbalances can cause, some of which have the potential to be deadly, like heart issues.4. Improves the health of the skin.

The high mineral content of sea salt has been found to rejuvenate the skin and improve its overall health. Contrary to popular belief, bathing in sea salt can actually moisturize the skin. It also helps to boost the function of the barrier of the skin and reduces inflammation on the surface of the skin, as well as roughness.

Research has found that sea salt has an anti-inflammatory effect as a result of the high amounts of magnesium it contains. Moreover, bathing in sea salt can flush toxins out of the body and improve circulation.5. It exfoliates the skin

Sea salt also serves as a powerful natural exfoliate. This is due to the coarse texture of the salt, which, when applied to the skin, helps to remove the buildup of dead cells that collect on the surface of the skin.

It also helps to tone the tissues of the skin, promotes the circulation of blood, and encourages the 6. It treats sinusitis

Sinusitis is a condition that causes inflammation within one or several of the paranasal sinuses. This condition can cause debilitating headaches, congestion, a decreased sense of smell, a cough, and even fevers. Patients who use nasal irrigations and/or sprays that contain sea salt report experiencing a significant reduction in the symptoms that are associated with sinusitis.

It is because of the exfoliating benefits that many manufacturers in the cosmetic industry add sea salt to their products, such as antiperspirants, skin cleansers, skin masks, and various other skincare products.7. Eases the effects of psoriasis

Psoriasis is a chronic inflammatory disease that results in the development of large, unsightly scaly, and itchy plaques on the surface of the skin.

The scaly patches that are associated with this condition are the result of the excessive and rapid proliferation of the cells of the skin, which is sparked by the inflammatory agents within the body that are created by lymphocytes, a specific kind of white blood cells.

Though there isn’t a cure for psoriasis, sea salt has been found to reduce the scaly patches and itching that are associated with this condition.8. Eases muscle aches and pains

Another interesting fact about sea salt that you may not be aware of is that it has the ability to ease achy and painful muscles. The reason sea salt has this ability is because of the high amount of essential minerals that it contains, such as potassium and magnesium.

These essential minerals have detoxifying qualities. It helps to remove the buildup of toxins that accumulate in the body, which can impact the muscles, causing them to become stiff, achy,9. Reduces the risk of osteoarthritis

After their treatments, patients saw a marked improvement in the swelling and inflammation in their joints, specifically in their knees. Moreover, some of the patients that were testes found that they had greater mobility in their joints as compared to those who prone to developing osteoarthritis but tried balneotherapy with traditional sodium chloride instead of sea salt.10. Improves the function of the nervous system
free star

If the transmission of these electrical signals off, the function of the nervous system will also be off, as low levels of sodium can cause the cells in this vital system of the body to malfunction. If the nervous system isn’t functioning properly, a variety of issues can arise, including issues with movement, communication, and sensory functions. and painful. This therapeutic quality has the ability to ease tension and fatigue in the muscles.

Mz. Leggs commented on the group '" TREASURES "'
7 hours ago

edward alexANDER left a comment for Hippy
9 hours ago

edward alexANDER left a comment for chipp
9 hours ago

edward alexANDER left a comment for DIVAPAMELA
9 hours ago

edward alexANDER left a comment for Barbara
9 hours ago

Barbara replied to the discussion 'Voting 4 this Site...'
11 hours ago

Barbara left a comment for Theresa F Koch
11 hours ago

Barbara left a comment for ♑Oriel PHd
11 hours ago

Barbara left a comment for edward alexANDER
11 hours ago

Barbara left a comment for Ildiko Figder
11 hours ago