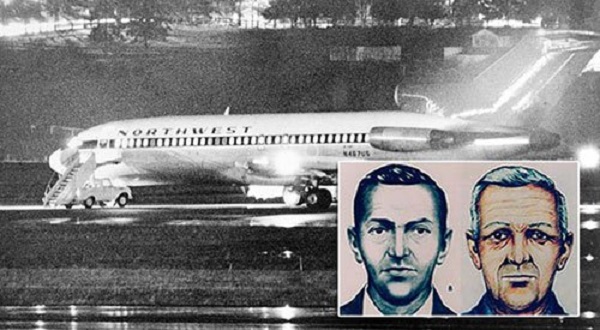 The Passenger in 18C.
It's the only unsolved hijacking case in the history of commercial aviation. On the afternoon of November 24, 1971—Thanksgiving Eve—a man aboard a flight from Portland to Seattle threatened to detonate a bomb if he didn't receive a hefty ransom. Once he got the money, the hijacker released all passengers and ordered the crew to fly to Mexico. En route, with cash in hand, the man parachuted from the aircraft. 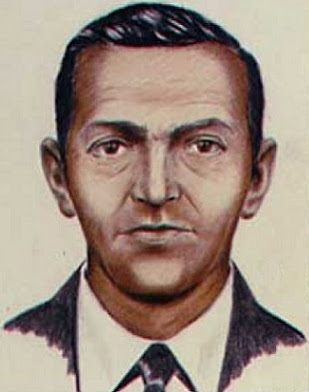 This man was known as D.B. Cooper. After a 45-year FBI investigation, his identity, whereabouts, and motive remain unknown. No one even knows whether he survived the jump—and one of the prime suspects died this summer. But there are plenty of suspects, theories, and bizarre details to fixate on.

The FBI's extensive records on D.B. Cooper describe him as a "white male, 6'1" tall, 170-175 pounds, age-mid-forties, olive complexion, brown eyes, black hair, conventional cut, parted on left." Cooper boarded Northwest Orient Airlines Flight 305, he settled in his aisle seat at the rear of the 727, lit a cigarette, and ordered a bourbon and soda. Then he handed a note to Florence Schaffner, a 23-year-old flight attendant. "I have a bomb in my briefcase," it read. "I want you to sit next to me."

Schaffner did as instructed. Cooper told her the rest of his demands: $200,000 and four parachutes, delivered on landing at Sea-Tac Airport. While police and airline staff on the ground scrambled to assemble the money and chutes, the pilots flew in circles above Seattle. Passengers were told that a minor mechanical issue had forced the plane to burn fuel, prolonging a flight that would normally take 30 minutes.

After three-and-a-half hours in the air, the 727 finally landed. Having received his money and parachutes, Cooper dismissed all 36 passengers and two of the six crew members. The plane refueled and took off for Cooper's next requested destination: Mexico, via Reno and Yuma to refuel. During the first leg, with the crew in the cockpit, Cooper lowered the rear stairs and parachuted into a thunderstorm. He has never been found.

Prime Suspects.
Richard McCoy, Jr.
On April 7, 1972, a man traveling under a fake name boarded a Newark-Los Angeles flight. Shortly after take-off he handed a note to one of the flight attendants. The note demanded $500,000 and four parachutes. If these were not furnished, the man, a seasoned skydiver and helicopter pilot, would bomb the plane. The 727 landed and refueled, the hijacker exchanged passengers for cash and parachutes, and, en route to the next destination, he jumped from the rear stairs to freedom. Sound familiar?

This hijacking occurred less than five months after the D.B. Cooper incident, leading many to suspect that the same culprit may have been responsible. The perpetrator of the April crime, Richard McCoy, Jr., was convicted of air piracy and received a 45-year prison sentence. On August 10, 1974, however, he and some fellow inmates hijacked a garbage truck and escaped their Pennsylvania penitentiary. When the FBI finally tracked McCoy down in Virginia three months later, a shoot-out left him dead.

Robert Rackstraw
Back in the '70s, pilot and former paratrooper Robert Rackstraw had a whole lot going on. Grand theft, $75,000 worth of bad checks, and the possible murder of his stepfather were just a few of the infractions for which authorities nabbed him. After being acquitted of the murder charge, Rackstraw saw fit to fake his own death in 1978 by logging a false mayday call from a rented plane in northern California. He spent two years in prison for check fraud and theft of an aircraft.

In the 2016 book The Last Master Outlaw, authors Thomas J. Colbert and Tom Szollosi presented evidence gathered during a five-year investigation into Rackstraw's past. They concluded he was the legendary hijacker, a claim Rackstraw's lawyer called "the stupidest thing I've ever heard." Rackstraw died from a heart condition on July 9, 2019.

Kenneth Christiansen
Kenneth Christiansen had a more direct link to the Cooper incident: he had worked for Northwest—the hijacked airline—as a mechanic, flight attendant, and purser. Kenneth's brother Lyle claims that when Kenneth was on his death bed in 1994, he said, "There is something you should know, but I cannot tell you!"

Kenneth had been a military paratrooper. The year after the D.B. Cooper hijacking, despite being on a modest flight attendant's salary, he bought a house in cash.

Suspect Richard McCoy, Jr. hijacks a plane in a nearly identical fashion, but is caught by authorities after a motorist spots him hitchhiking with a flight jumpsuit and a duffel bag.
February 1980

Eight-year-old Brian Ingram finds $5,800 of the ransom on the banks of the Columbia River.
2001

The FBI lifts a DNA sample from D.B. Cooper's clip-on tie. The fresh evidence does not prove fruitful.
July 2016

The FBI closes its investigation into the identity of D.B. Cooper. Internet sleuths continue the search.
July 9, 2019

Prime suspect Robert Rackstraw, who faked his own death in 1978, dies a free man.

Cannily, Cooper had taken his ransom note back from the flight attendant, so investigators were unable to examine it. Cooper did leave a few traces behind, though: some cigarette butts, a hair on the headrest of his seat, and a clip-on necktie, which he tore from his collar before hurtling himself from the plane. Unfortunately, the FBI could not get any fingerprints from the items.

Though it was initially believed that Cooper was a battle-scarred skydiver—perhaps a paratrooper—further analysis found that he was likely no expert. "No experienced parachutist would have jumped in the pitch-black night, in the rain, with a 200-mile-an-hour wind in his face, wearing loafers and a trench coat," said FBI Special Agent Larry Carr in 2007. Investigators also thought Cooper acted alone. If he had worked with an accomplice, he would have requested a much more specific flight path rather than saying "Fly to Mexico" and jumping out when visibility was poor.

In 1980, a child's discovery reignited interest in the mystery. Eight-year-old Brian Ingram was digging in the sand on the banks of Washington's Columbia River when he found a bundle of rotting $20 bills totaling $5,800. When his parents contacted the police, they learned the serial numbers on the cash matched those from the stash given to D.B. Cooper. Aside from the few items left behind on the plane, this is the only material evidence found from the hijacking. Six years after he discovered the money, Ingram was allowed to keep $2,760 of it. In 2008 he sold 15 of the fragmented $20 bills at auction for $37,433.38.

"He could be anybody—because he was nobody." Hippy left a comment for MzT aka LadyDreamer
4 hours ago

Hippy left a comment for Nagy Anna
4 hours ago

Hippy left a comment for EDIT CSALA
4 hours ago

Hippy left a comment for Signature Stilettos
5 hours ago

Hippy left a comment for Lady Wind
5 hours ago

Hippy left a comment for Theresa F Koch
5 hours ago

Hippy left a comment for edward alexANDER
5 hours ago

Hippy left a comment for MARGARIDA MARIA MADRUGA
5 hours ago